Our fraternity runs on the leadership from its members. Our brothers work diligently at the chapter level all over the New York State, giving up their time and talent to help the fraternity run. Please see a listing below of members who volunteer on a daily basis at the district level: 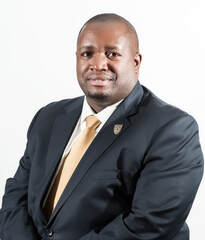 A native of the Bronx, New York, Brother Malik Goodson was initiated into Alpha Phi Alpha Fraternity, Inc. on March 27, 2004 via the Zeta Zeta Lambda Chapter in the Queens, NY. As a member of ZZL, Brother Goodson has held countless positions in his chapter ranging from Secretary, Treasurer, Chapter Dean, Vice-President and served as the only three-term President of the chapter.  In 2010, his outstanding work in the name of the fraternity earned him the PHI Award for Brotherhood from the Gamma Iota Lambda Chapter, and in 2010-1 he was named the NYACOA and Eastern Region Alumni Brother of the Year.  His past accomplishments in the fraternity have included serving as his chapters Chairman for their bi-annual Alpha Affair, which has raised over $40,000 for scholarship and philanthropy in the Queens, NY community over the past 7 years; and he has earned numerous awards and recognition's from his home chapter, other local chapters and sororities.  He has risen through the ranks locally having served as the Area Director for all New York City chapters from 2012-2015.  As a result of his knowledge in the membership intake field of the fraternity, the immediate Past Regional Vice-President appointed Malik as the Director of Membership for the Eastern Region from 2013-2017.  In 2014, he was elected as the 1st Vice-President of NYACOA and served for 4-years with our 8th NYACOA President, Brother Christopher Ellis, Jr.  While serving as 1st Vice-President for NYACOA, Malik was also appointed as the Chief of Staff of the fraternity’s Eastern Region under the Regional Vice-President, Brother Lucien Metellus.  As Chief of Staff, Malik managed the nearly 100 staff members and committees of the regions’ seven districts.

Malik is the youngest of two children.  He received his primary education at the Horace Mann School in Riverdale, NY.  While in high school, Malik experienced his first opportunity of international living, having spent the summer of 1994 studying Spanish and experiencing the culture and country of Costa Rica.  He graduated in 1995, and later that fall, enrolled in the School of Architecture at The Syracuse University.  While pursuing his degree, Malik spent the spring 1999 semester abroad and studied architecture based in Florence, Italy and had the opportunity to study in numerous cities throughout the country including Rome, Venice, Milan and Naples.  While in Europe, he also spent time traveling in Barcelona, Paris, London and Switzerland.

While studying architecture, Malik interned during the summer months at The Port Authority of New York & New Jersey, which led to full-time employment upon graduation in 2000. Now, a 19-year member of the organization, Malik currently serves as a Program Manager in the Major Capitol Projects/World Trade Center Construction Department, a position he has elevated to since 2007 after serving in the Engineering Department’s Engineering/Architecture Design Division.  As a Program Manager, Malik currently oversees nearly $200 million dollars in design and construction, encompassing the Architectural Finishes of the World Trade Center Transportation Hub project.  While serving as a manager of construction of the Transportation Hub, he earned his Master of Public Administration from Fairleigh Dickinson University in 2009.

While remaining as busy as he is, Malik has been married to his wife, Shannon for 14-years; and is the proud and devoted father of their beautiful six-year-old daughter, Malerie.